Anna Zimmerman's back pain consumed her to the point she could not lift her arm for a month, which worried the aspiring violinist. 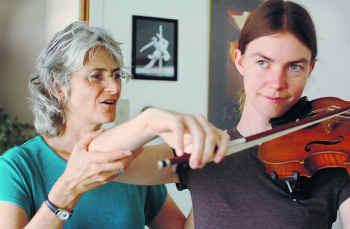 The 21-year-old University of North Texas student saw doctors who ran tests and prescribed medicine, but nothing relieved her suffering.

Two years ago, she paid a visit to Phyllis Richmond, who offered a remedy called the Alexander technique, a century-old method used often by performers to improve their posture and coordination. Since then, Zimmerman's pains have decreased and her movement has been restored.

"After a month, I was able to hold my violin for three minutes without dying," Zimmerman said. "Over the course of six months, I was slowly able to start practicing again and getting back to seriously pursuing a professional career."

Now, the Alexander technique is getting attention from researchers. A 2008 British Medical Journal study said a handful of lessons in the technique along with exercise can reduce symptoms among sufferers of chronic back pain.

It's tempting to think of the technique as akin to a mother saying, "Don't slouch. Sit up straight," but it's more than that. The technique is not therapy, not medicine and not massage. Richmond called it "posture and coordination re-education."

Richmond, a former dancer whom the American Society for the Alexander Technique lists as the only certified teacher in the Dallas area, says people develop bad habits over time in how they sit, stand and move around. That eventually can cause great pain.

"If you think that in order to play the piano, you've got to raise your shoulders, which a lot of people do, then that's what you're going to do," she said. "Now that's highly inefficient and can cause pain, injury and the end of a career. What you have to do is learn to conceive of that differently."

"Phyllis is able to help my body relax, release and restore itself with very little reliance on me," said another student, Brenda Dearman, 66, a retired music professor, who drives from Marshall to see Richmond. "It feels so wonderful."

The technique was developed in the 1890s after a case of laryngitis. F.M. Alexander, an Australian actor, closely watched himself and saw that tension and stress in his head and neck contributed to his condition.

He moved to London, wrote a series of books, began teaching the technique and trained others to teach it. In recent years, performers such as John Cleese , William Hurt and Kevin Kline have touted the technique's benefits.

Besides the British study, doctors have said little about the technique. Dr. Anjali Shah, an assistant professor in UT-Southwestern's physical medicine and rehabilitation department, says the technique gets more attention in Britain and Europe than in America. Also, she says, many performers use it along with other techniques.

"It's hard for people to follow the exact teachings of it," Shah says. "I don't know many people who use just one. Usually, it's a potpourri."

Richmond agrees that the Alexander technique is not a quick fix. In fact, after two years of lessons, Zimmerman still refers to herself as a beginner. Yet Richmond says her patients leave lessons with her feeling freer and more relaxed.

"It's endlessly gratifying because you know you're helping people," she says. "You're improving their quality of life."