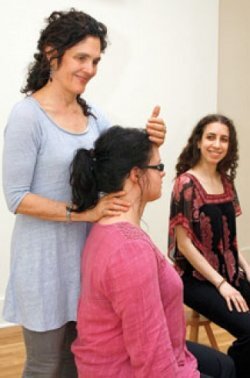 Our society is one where smart phones are constantly buzzing and almost everyone is trying to balance a demanding career with a social life. In all the hoopla, we often forget to take care of ourselves. Hunching over computers for hours or fretting over work, as any over-achieving New Yorker knows, will come back with a vengeance. The Alexander Technique, a way to relieve stress and muscle tension through a guided system, might prove to be some assistance.

Practitioners of this alternative method use hands-on and verbal instruction to tap into sources of fatigue and open up muscles. A standard class consists of everyday movements like sitting down, standing up, reaching and bending. Unlike in yoga and pilates classes, you don't have to be embarrassed by your tight hamstrings.

After nine years of studying his own body, Australian-born actor Frederick Matthias Alexander developed the Alexander Technique in 1869 and began teaching it in Europe. In recent years, the approach has gained a steady following on the East Coast.

"People often feel pain without an injury to attribute it to," Hope Martin, an Alexander teacher in Union Square, says. "From an Alexander perspective, all of those aches and pains are a result of how we use our body. The idea is to recognize these habits and how they affect you."

The Alexander Technique has been primarily taught in performing arts schools, but more recently has been recognized by people from all backgrounds. Anyone dealing with stress, pain or even anxiety can benefit.

Bill Connington, an actor, playwright and Upper West Side Alexander instructor (createabalance.org) was recently contacted by a female business professional for help with public speaking. "Working on public speaking or stage fright from a physical point of view can help you relax by connecting to your breathing," he says.

The technique is more about connecting the body with mind and emotions, as opposed to just a physical relief. Connington himself uses the technique to help with his own vocals and performances. "My character [in his off- Broadway show, Zombie) is a serial killer," he explains. "The technique helps me stay released within my body even while I'm playing such an intense role." He said it's important for him to be in-tune with his body before working on students.

Like Connington, Martin teaches a broad range of New Yorkers in her own studio (hopemartinstudio.com). She now offers private and group sessions, between five to 10 people, with hopes to expand this September. There will be a class for people with repetitive stress-related injuries, a class for the elderly and even a class for adolescents.

"I think Alexander's day has come," says Martin, who first studied the technique in 1979. Martin points out that the Alexander Technique is not goal-oriented, an aspect that separates it from other exercise systems.

"Trying too hard with anything just produces more tension and rigidity," Martin explains. "The hallmark of the Alexander skill is not to do something, but rather recognizing what it is that is getting in your way and letting it go."

"With Alexander, you don't have to put on special clothes, set an hour aside, go to the gym and sit on a mat," Connington said. "You can do it whenever—driving a car, sitting at a computer or singing.

Learn the Alexander Technique
Find a Teacher for Lessons, Classes and Workshops